We take on the Three Peaks Challenge for charity

A group of Hawksford employees took part in the National Three Peaks Challenge in June, raising £2,500 for two local charities.

The National Three Peaks Challenge involves climbing three of the highest peaks in England, Wales and Scotland - Scafell Pike, Snowdon and Ben Nevis - within 24 hours. The team has been collecting sponsorships from business partners, intermediaries, friends, family and colleagues, and all proceeds are going towards Durrell Conservation Trust and Mind Jersey.

Hawksford's Head of Marketing, Cherith Fothergill, said: 'Our team was made up of people from all areas of the business, from directors through to admin assistants. Everyone pitched together and we worked really well as team to get through the challenge safely and within the recommended time frame for each peak. We're all really proud of our achievement and delighted that that the money raised will benefit two very worthy local charities.'

The 24-hour challenge included both walking time and travel between the mountains - approximately 14 hours hillwalking and a further ten hours driving. The three mountains sit at a combined height of 3,000 feet, the equivalent of scaling the Shard 10 times or climbing half way up Kilimanjaro.

The Hawksford team started the challenge at the base of Scotland's Ben Nevis.  After completing the mountain's 1,345m climb in an average team time of six hours and 30 minutes, the team travelled to Scafell Pike in the Lake District to commence a 978m ascent in the early morning. After completing the second leg of the challenge in approximately three and a half hours, the team travelled to Snowdon and scaled the final 1,085m in just over four hours.

Michael Powell, director at Hawksford, said that the experience had been challenging but fun with his colleague's energy, commitment and team spirit on the mountains reflecting the whole ethos of Hawksford Group. 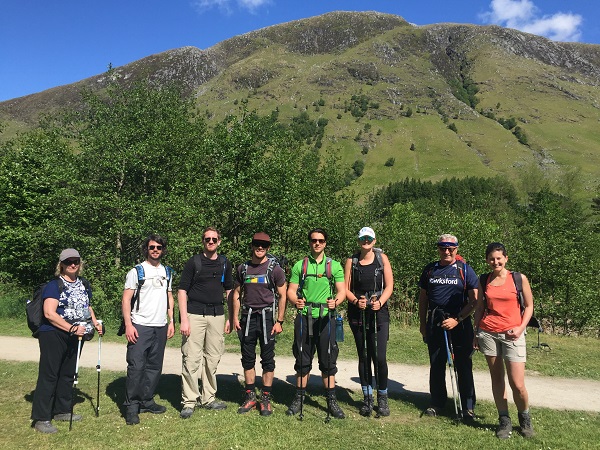