The new Regulations for the Implementation of the Individual Income Tax Law of the PRC, which came into force on the 1st of January 2019, have not only changed the computation method of China’s Individual Income Tax (hereinafter referred to as ‘IIT’) but have also introduced new income categories and the yearly reconciliation timeframe. As this is now the second year of implementation of the IIT reform, it’s time for individuals to complete their annual IIT reconciliation filing for 2020.

In this article, we will go through the key requirements of the IIT regulation and also draw attention to the consequences for individuals and companies after a three-year transition period ends in December 2021 for the tax-free allowances for foreign employees and the special taxation on yearly bonuses. Both changes will significantly increase the tax burden of individuals and/or companies and there’s no better solution than facing all the available scenarios in advance.

As applied in the last fiscal year, individuals shall pay IIT on the five income categories listed below:

The IIT calculation method is based on a cumulative and progressive rate that takes into consideration the total income generated over the year, rather than during each month, although the IIT payment is due on a monthly basis.

By the 30th of June each year, all China-resident taxpayers shall submit the IIT reconciliation for the previous year in order to confirm that the IIT prepaid during the year matches the income generated over the same period and, in case of any discrepancy, to rectify the difference.

The latest regulations identify three types of situations in which taxpayers are exempt from yearly IIT reconciliation:

IIT yearly reconciliation procedures play a key role in ensuring that the IIT prepaid during the year matches the total tax payable calculated via the yearly overall individual income, especially in situations where more than one source of income coexists and/or employees have changed employer during the same financial year.

Individual taxpayers have the statutory obligation to complete the IIT reconciliation based on their cumulative income for the year (unless belonging to one of the exempt categories mentioned above) and are responsible for covering any difference in the final IIT calculation (i.e., to arrange a top-up or a refund).

Employers shall be responsible only for the calculation and declaration of the IIT generated via their own business-related activities (i.e., during the provision of wages and salaries).

At the beginning of 2021, the State Taxation Administration released an announcement related to this year’s IIT filing with clarifications on the implementation of the rules and their interpretation, which differ slightly from 2020 as it now emphasises that the responsibility lies with the individual employee.

How to Proceed With Annual IIT Reconciliation

There are three ways for taxpayers to proceed with the annual IIT reconciliation:

Tax authorities have rolled out an official app (个人所得税) with the aim to simplify the reconciliation procedure in a user-friendly app that is available for all taxpayers.

Considering that the app is a relatively new tool for tax monitoring and management, it is available in only one version for both Chinese nationals and foreigners. The latter must have a mainland Chinese phone number and will have to visit their local tax bureau to collect a tax identification number which can be used in lieu of the unique code available on Chinese ID used by Chinese nationals to log in to the app.

Although taxpayers bear the ultimate responsibility from the perspective of the tax authorities for the IIT being settled at the year end, taxpayers can delegate their employers (acting as withholding IIT agents during the year) or a professional trusted third party to carry out the reconciliation on their behalf by signing a relevant power of attorney to be used upon declaration.

Moreover, taxpayers bear the ultimate responsibility for the authenticity and completeness of the information submitted. The fines for omissions or late filing have a direct impact on the personal credit rating of the individual who, therefore, should be fully aware of and knowledgeable towards individual tax compliance matters.

All supporting documents and data should also be kept by the taxpayer in case of any tax inspection in the future. Alternatively, the withholding agent should assist the taxpayer in completing the reconciliation filing by providing the necessary information and handling the process, if requested.

Let our skilled team of experts help you. We provide human resources and taxation services.

According to the policy, by the 31st of December 2021, foreign taxpayers will no longer enjoy the preferential policy of tax exemptions, including (but not limited to) housing allowance, language training fees and children’s education fees. Thus, the special IIT deduction process will be unified for all taxpayers in China, regardless of their country of origin.

From the 1st of January 2022, expats will have access to the same IIT deductions items granted to Chinese employees, which are:

According to the IIT Special Deduction Procedure (Trial Implementation), the six deductions mentioned above will be deducted according to a standard amount. For example, the applicable deduction amount for housing rent in Shanghai will be RMB 1,500 per month (or RMB 18,000 per year). Below is a table summarising the deduction types and amounts, although the amounts may differ by city: 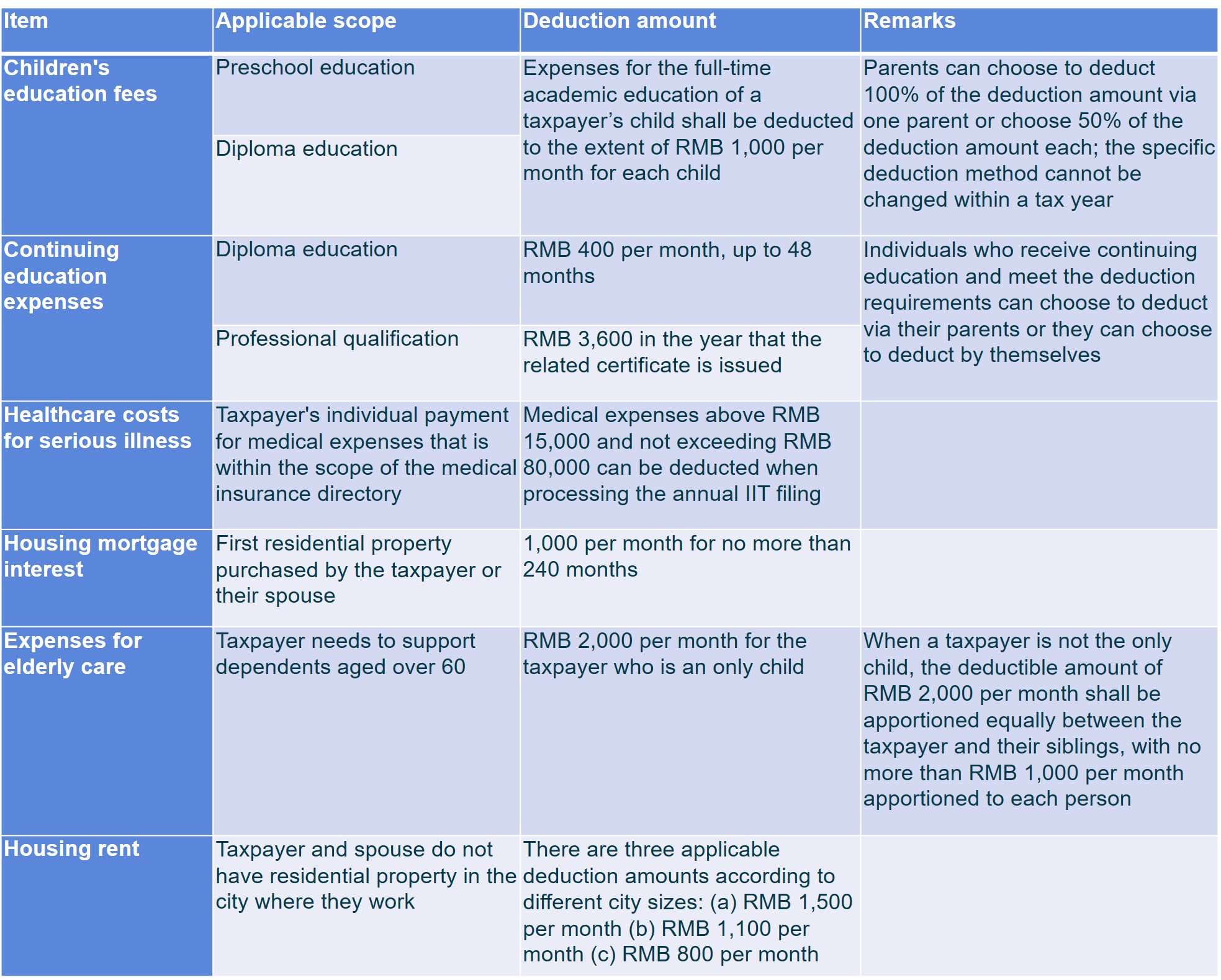 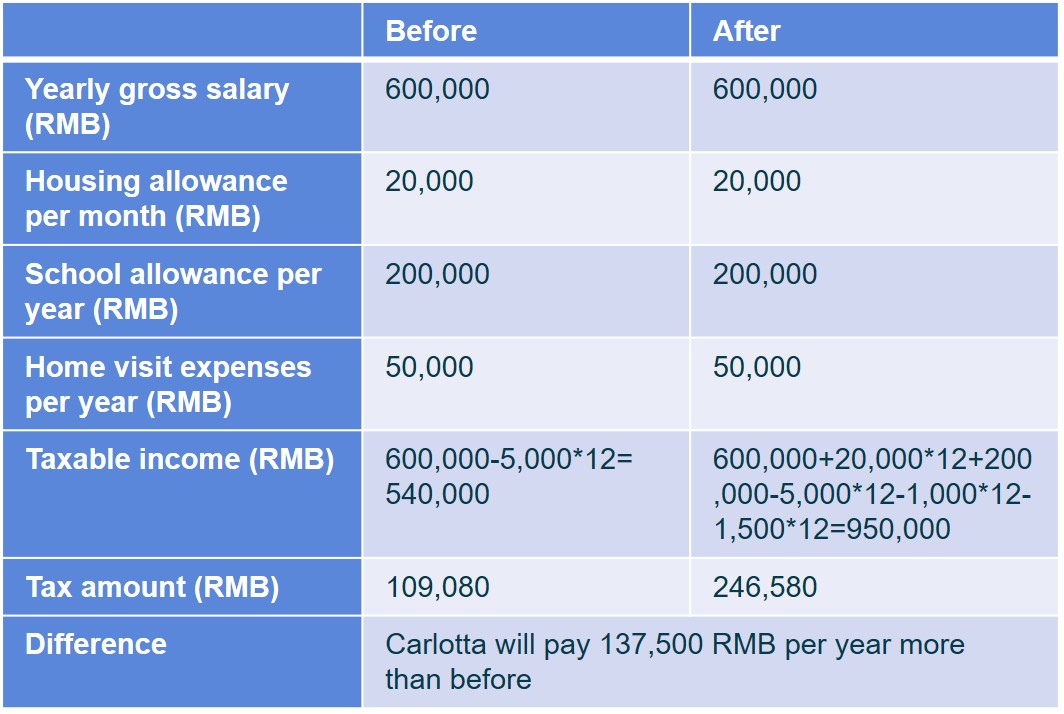 Lastly, it is worth mentioning that until the 31st of December 2021, annual bonuses will enjoy a beneficial tax treatment, but starting from the 1st of January 2022, annual bonuses will become part of the comprehensive income category that is taxable at the standard rate.

Undoubtedly, the IIT reform will bring new challenges to companies in the near future as the termination of the tax-free allowances for foreign employees and the beneficial tax treatment for yearly bonuses will cause a significant increase in the labour costs for companies.

As a consequence, companies should budget for such costs and plan solutions in advance to allocate their workforce efficiently, eventually reviewing their global mobility policy, and relocating and/or renegotiating salary packages with their staff. There are certain locations in China, such as Shenzhen, Hainan Free Trade Zone and the Greater Bay Area, that are promoting the employment of local and foreign talents by granting reduced taxation rates on salaries, incentives/deductions for employers and simplified rules for obtaining work permits.

It is still unclear at this stage whether there will be further changes to the policies, aiming to extend the transition period, reduce the tax rates or introduce other benefits, especially to encourage the employment of foreign talents. In the meantime, we suggest that companies be prepared for the changes and plan the best and most efficient solution in advance to preserve their human capital.

How Can Hawksford Help?

Hawksford is an established provider of company registration and outsourced corporate services in China. With more than 100 multilingual professionals based in Shanghai, Beijing, Suzhou, Guangzhou and Shenzhen, we are able to offer the very best local knowledge to our international clients and provide them with comprehensive introductions to the various local and international banking institutions we’ve had the pleasure of cooperating with in the last decade.

We provide human resources and taxation services, including the calculation of monthly payroll, IIT declarations, social insurance and housing funds payments. In addition, we advise clients on matters related to human resources, onboarding and separation processes, as well as provide solutions for staff management.

How to Finance Your Business in China

Find out more about How to Finance Your Business in China

How to Mitigate the Risks of Employment Termination in China