Imagine a gender equal world free of bias, stereotypes and discrimination. A world that is diverse, equitable, and inclusive. A world where difference is valued and celebrated.

March 8 is International Women’s Day (IWD) – a day of celebration for the social, historical, cultural, and political achievements of women all around the globe – and while gender bias, discrimination and stereotypes are being challenged, there is still much to be done in terms of achieving parity.

Based on its current trajectory, the World Economic Forum estimates it will now take 135.6 years to close the gender gap worldwide1. At Hawksford, we understand there is still an ongoing need for more progressive mindsets and inclusive behaviours to be forged, and we are proud to play our part in this.

In support of this year’s IWD theme, #BreakTheBias, and to demonstrate that ‘professionalism has nothing to do with gender’, we caught up with two of our female leaders to celebrate their successes, and inspire our upcoming future leaders within the business.

How long have you been with Hawksford? And how did you first find out about the organisation?

Rebecca: I joined Hawksford in November 2020. Having first been introduced to Hawksford London office through a recruitment agency, I was particularly drawn in by the fact that it was clearly a people focussed business. A couple of other aspects that really drew me towards the business was its impressive growth strategy through investment and acquisition, but also that in growing the business, Hawksford is also set on ensuring its people play a fundamental role in that journey.

Collette: I have been with Hawksford for four years now, and I initially heard about the role via Kendrick Rose’s (a recruitment agency) feed on my Facebook page. I wasn’t actively looking for a new role, but I was enticed by the job description, it sounded scarily challenging and I knew it was the right fit for me.

Why did you choose to work in the professional services field? Was this always something you wanted to do when you were a child?

Rebecca: It certainly was not my original idea as a child to work in the professional services field. Growing up, my ambitions were much more creative… When I was younger (and I mean really young!), I always wanted to become a hairdresser… but later, while still at school, I thought I might go into teaching, as I enjoyed working with people and children, having had the opportunity to do some work experience at the local infant and primary schools. It wasn’t until I had to make a decision as to which university I should apply to, that I thought perhaps I might be interested in accounting and finance, as I particularly enjoyed maths, so I chose a degree; albeit not entirely with the intention to go into the professional services industry… that decision was to come later.

Towards the end of my degree, following on from numerous conversations with the career adviser, and taking into consideration that as the units of my degree (business, accounting, finance, and management) had given me an insight into following a career in professional services, I decided that a career in accountancy would be interesting and challenging.

Collette: As a child I always wanted to be an airhostess (I don’t even like flying!)… I think it must have been the lovely outfits and the immaculate hairstyles.

I moved to Jersey when I was 18 and went straight into the hospitality industry, before retail. I had two jobs for years, a full-time day job and then I worked in a restaurant three nights a week. All of my friends worked in finance, and I was dead against it until I got a job in a call centre and got my first pay packet… this changed my whole mindset on what I wanted to do.

As a female professional, have you ever encountered or experienced any bias, stereotype or discrimination towards women?

Rebecca: I think I would be wrong to say that I have never experienced such behaviour, as on occasions there have been underlying elements of bias, particularly in male dominated offices. There have certainly been situations where I have been surrounded by more assertive characters (the majority of which just so happen to have been male).

As a woman, and particularly as someone who may be less assertive than others, I do feel that I have sometimes had to work that little bit extra to get noticed throughout my career. Whether it’s been trying to establish that leadership presence in the boardroom, or simply being able to get your point across in a meeting, you often need to push yourself outside your comfort zone and be that little bit more authoritative than you would normally be.

That said, I like to think slowly things are changing for the better. There appears to have been some progress in terms of more women filling senior leadership roles within the industry. Even from my own experience working within my previous roles, I’ve witnessed a transition to a more even split in terms of the male to female ratio.

Collette: Personally no, but I have heard others talk about it being ‘a man’s world’… I don’t think it is, however. I strongly believe that you get out of anything what you put in, and hard work does pay off. Do you need the right support and a firm that values you? Yes, of course, but anything is achievable if you pave your own way.

What is the most challenging or difficult thing you have had to overcome in your career? Do you think it could have been easier for a male in the same position?

Rebecca: I think achieving management level has probably been one of my toughest challenges, as there remains an element of prejudice against the promotion of women to leadership roles in a male dominated profession.

As I said earlier, I have never really been your typical strong, assertive leader that would be associated with a male in a similar position, however I do promote a firm, positive leadership style when necessary to ensure that all work, including client work, is undertaken in a timely manner. I would also say that in order to overcome all the challenges that have come my way, if anything, it has probably been my people skills, my resilience, determination and tenacity that have got me where I am today.

My style of leadership may not be associated with the majority of the male leaders I have worked with in the past, but it has served me well throughout my career and brought me loyalty and respect from my staff.

Collette: Letting someone go. While it was the right thing to do for both them and us, it was not a pleasant experience. I think it’s a difficult task for anyone to do, regardless of your sex.

What are your short- or long-term goals for your career and/or personal life?

Rebecca: My current short-term aims for my career are to work with and lead the London office of Hawksford in achieving the company’s ambitions of growing the business, while encouraging my staff to achieve their own personal and career goals.

Collette: My goal was to always be in the right role by the time I was 40 and this year I hit my goal, I was promoted to a director. I want to now settle into this position, learn as much as I can and be the best I can be, before making my new five-year plan. 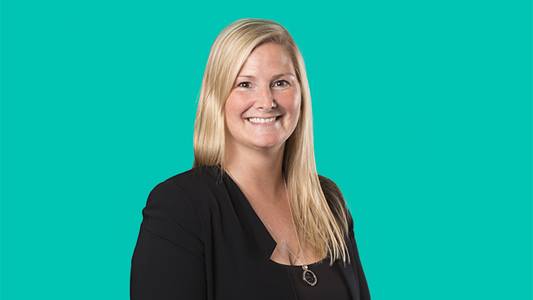 Collette joined Hawksford in 2018 having worked in the finance industry for over 17 years.

Take a look at our available vacancies: